measurements of the known world 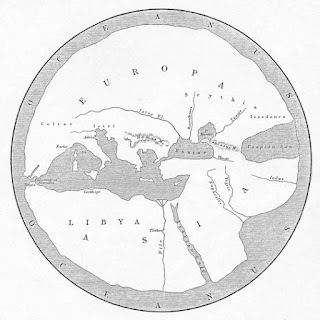 I want the setting to be highly random every time you play. Questlines, species of animals and plants, important places, they should all be procedurally generated – at least to a certain extent.  It's impossible not to work with some templates. Say you want random places – you have to stop the randomness at some point and set fixed parameters. If I want settlements to crop up in the game, it's not going to happen unless I make some blueprints with blanks to fill in, and a balanced "world blueprint" to put at least a few villages in addition to other places of interest. The same goes for animals: I can't just blindly generate a bunch of random species and put them on the map. There must be a balance of predators, prey, pets, and atmospheric population of The Land.

Every now and then, some fresh developer announces that he (mostly guys do this, yeh :P) is writing a RL where a totally unique world and plot will be generated each time. Content like trade, reputation and other intelligent behaviour will supposedly just procedurally occur from the sublimely wrought code that binds it all together. I think what we (counting myself amongst this throng of vapourware developers) fail to realize, is this basic principle, that you have to actually implement all the content that goes in the game. Sure, you can patch it together so that interesting combinations will occur procedurally, but there is a reason why so few RLs (if any?) exist that really take this to the next level. A conventional truth is that procedural generation can be used to alleviate manual labour by pregenerating stuff like landscapes, that would otherwise have to be coded by someone. This may be true for genres like FPSs and development models used in big business, but in RL development, the opposite seems to be true: Rather than handcrafting less content than the player is going to see in any one game, you'll end up having to make more, by orders of magnitude.

If there is something like a story in any given RL game, I think it's the setting. Exploration of the game's universe doesn't happen linearly, but rather fractured up by features like permadeath and randomness. I actually believe this to be a key to random stories in RL games: Granted, you'll find yourself implementing stuff like procedural dialogue and questlines, but the actual sense of the work will be in something perhaps much less grand: just the kind of random stories that have always been extolled on RL forums. So much for holy grails and silver bullets. 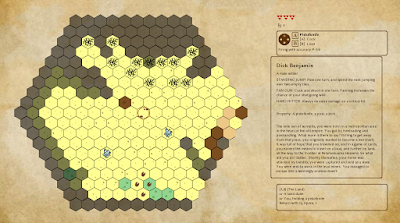 As I stated, I want the map to be randomly generated, but I'm not aiming for a huge world. My current testing version generates a landscape encircling a diameter of about 400 hexes, surrounded by endless desert. Rather than each playthrough taking place on an entirely different planet, I'm envisioning different regions in one and the same world. For one thing, it'll make a lot more sense if later I implement ghosts, or even the option for retired characters to show up as NPCs in later games. It also means I can write quite specific lore to reflect a single world/culture, and possibly conceive of one or more overarching plots, possibly even win conditions. (And yet, why bother with win conditions; doesn't an unwinnable game world highlight the very strengths of the RL genre?)

I will of course allow myself to vary parameters in the setting if I think it can be used to advance gameplay or the story itself. The Land is situated on the frontier of a continent loosely based on historic America, during a period of colonization by settlers and officials of «the old world». One could randomize the ruling form of the old world, for instance: Is it an empire or monarchy, or a federation or a group of rivaling states? That might not be worth the effort, actually. But it might be interesting if for instance the religious fractions were partly randomized. In one game priests and mystics hailing to the prevalent religion(s) might be wandering monks and nuns, in another they could set up temples in villages or near natural sources and holy sites. And I've been thinking about having the old world represented by a random currency in each game.

Old world money, however, would probably just function as trade goods. The popular currency used in The Land is always lead bullets. Slugs function as coins as well as ammunition, so in The Land, the saying that one person's life is worth one bullet, is no metaphor; it's the actual rate. It's a harsh land. Slavery may be more or less predominant in different playthroughs, but it will always be an issue
in the game world. But I guess there may be some sort of hope. Should I flesh out the theme of slavery into a main plotline, one conflict would surely have to be the fight for the abolishment of slavery! The law is still fluent in The Land, dictated by the varying influences of various power fractions. Fractions might include commercial companies and military forces from the old world, opposed to forces for political independence, ranging from semi-autonomous settlements to secret societies, but also powerbases ambiguous to this dichotomy, like the church or different sects/cults, local commercial interests and gangsters fighting it out between themselves while simultaneously trying to stave off the man, who wants all of their heads on a platter.

Some fractions might be pure berserker types when faced with the players, such as desperadoes, highwaymen, and parts of the natural world. For now, I have more than my hands full just getting all systems to work and writing the bare bones of a weird western setting, but naturally I would love to add an indigenous culture, with its own bases of power and playable careers. In the current public version, there is already the skeleton of a career system, starting the player out with a random career out of many. I'll soon pick and flesh out a few careers, and then add more as I go along. Careers might represent power fractions in themselves, and I hope to use them as stepping stones to describe the setting. I'm pretty sure The Land will feature lots of conspiracies, so it might make sense to have some of the careers represent something akin to guilds or networks. There may be a fellowship of the railway station masters, or a code of conduct taken by certain gunslingers and avengers, etc. The career you choose at the beginning of the game will represent your background, so it should be fully possible to start out as a lyncher, but then pursue the skills and ethos of a witch hunter or an agitator. Starting careers should open up something like a skill tree, however, and maybe possible starting missions. As development progresses, specialized skills can be assigned to specialized careers, in addition to being learnable in the game.

At the moment, I'm debugging and finalizing the basic world building engine, whilst simultaneously using it as an opportunity to add some content. For instance, I've been having some trouble with places/encounters containing subencounters (say, a pampas, containing a house, containing a critter). To test and tweak, what better way than writing up a few places that use this exact mechanism. The next release seems to be in sight. And if you think I've been ranting my way through this blog post, you should probably have stopped reading a long time ago.