Fragments of principles of prop design in LoSt 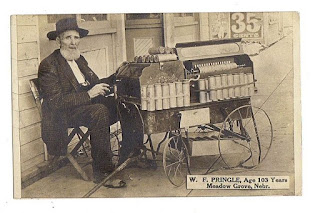 Props (and skills) are slightly stylized representations of a characters resources. This stems from back when LoSt (Boot Hill RL, at the time) was a cardgame/RL hybrid. I didn't want the player to become too much like a "paper doll" with assorted inventory. Some learnable skills may assume you to have the necessary tools at hand, as some props assume you possess the necessary skills to use them.

I never much cared for detailed weight systems. Instead, LoSt sets a fixed limit to how many props a critter is allowed to carry. Inventory is capped at six slots, which is just enough to get by. To simulate encumbrance, some items are tagged as "heavy" or "stackable" (light). Heavy items impose a penalty on your initiative, making them practically impossible to carry during combat. Stackable items are consumables and commodities: If you're holding a stick of dynamite, you might as well be holding five. Stackable items only take up one inventory slot (per item type), regardless of how many you are carrying.

… building houses, skinning animals, modifying items and mailing them to your future incarnations, gambling, rail laying, light landscape gardening … Who can tell if and how they will appear?

Lead (♄) is the most important prop in LoSt, doubling as money and ammo. As a symbol of prosperity, it could even be used as a stat akin to karma. Instead of a food clock, a system where the player spends 1♄to rest each night?

As always,
Minotauros
Posted by Aging Minotaur at 03:04 No comments:

Development is snailing along. LoSt#10 is the interrim release I had hoped to achieve before summer. It will probably be the last alpha release, before the meat of the game will start appearing. I'm still getting all basic systems in place, but #10 is still a big step forward from #9. NPCs have started to speak, and there are shops dispersed across the land, as well as a very basic bounty system (finding it can be considered a kind of an easter egg at present). There are also world building routines that will place the occational settlement, although these culture centers are still very flimsy, with not much to really see or do.

In any case, please try it out if you are interested. All and any comments are welcome.

Some features I hope to work on for the next few releases:

* AI: I need to settle some basic AI needs. Proper pathfinding will be in place, letting people use doors, walk around ponds. They'll also be picking up stuff, objecting to theft, and adhering to other defined causes and states of beings.

* UI: Tidbits of UI are planned, and will become necessary. Scrolling menus is one thing, but also some kind of game log to track your character's progress. Also in the works is a zoomed-out view of the map to allow quick travel in explored areas. If I get inspired, I might start working on a mouse interface, but I think it's better to focus on gameplay at the moment.

* Settlements: The big thing in LoSt #11 will be to breathe some life into the settlements. It ties into several features that need to be finished. First of all, I need to streamline the map generation a bit, and define some good settlement blueprints/templates. Second, there must be places of interest, and the locals should feel a bit more alive. In addition to at least a few plot hooks (available bounties/questlines), there must be some shops and etstablishments (randomly including gunsmiths, pharmacists/medics, oracles, assassins, pawnshops). Also, something like a saloon where you can rest, furnished with a bar and perhaps a self-playing piano (depending on how complex the bias/reputation system becomes, we can whistle for features like emergent bar brawls down the road). The town can be seasoned with interesting places and encounters. There might be a village green with a park or pond, a church/shrine, a post/mining/police office, soldiers in barracks, gardens and animal pens, animal baiters who take bets, maybe even baiting animals against humans, (mad?) scientists/naturalists who want rare specimens, landscape photographers who stray into the wild, some random person has a treasure map, or is a junkie, or secretly wants to kill someone else in town, or has the habit of entering empty houses to burgle them, or loves dogs, or hates children.

* Factions/reputation: The Land in #10 is pretty war-strifed. Goons and settlers skrimish. One task ahead will be to make the map a bit more settled, with settlers mostly staying in their towns, and bandits camping in the wild. It will be possible to interact and gain reputation with any factions. If you gain a positive reputation with mudfaced goons, the settlers and law-kids might want to lynch you, but you can still get trade, healing etc. in scattered bandit camps across the land. Further down the road, more factions will come. Law and crime factions will have more organized structures, in addition to various societies, from scientists to monks to queers to carnies to cults. The current AI supports factions quite well: recognizing which factions another being belongs to, liking/disliking beings which belong to certain factions or act in a certain way. As I add more sophisticated behaviour patterns, I should be able to model some interesting semblances of drama and tidbits of story. Engine-wise, I still have to add a detailed system for fluctuating reputation. More time-consuming will be to write the content, defining and balancing achievements/bounties and other trickeries hidden behind the rosepot.

* Bounties: There must be a few bounties to be had in the starting settlement, and some others spread across The Land. They range from petty (templates "my <puppy> got lost in the <cave>", "100Pb for the head of Luci Borges") to more involved stuff later on (kill the four desert masters to become the undisputed champion of The Land, prevent/perpetrate genocide on a group of humans or animals, discover what really lives beneath the lead mines, act as a mediator/monger between settlers and natives …) I'll have to start with something simpler, basic fetch/bring/escort quests, and all that. Some bounties can be pretty open ended, with many moving parts (randomly mix elements like locations, NPC templates, and other special conditions: "Defeat the mad barber in the abandoned sawmill, who has kidnapped the mayor's uncle"). Others may be more handcrafted, but allowing for story emergence. You may get hired to protect an establishment against an awaited attack, and might solve the task by barricading and waiting out the attack, or sneaking into the enemy camp. Hell, you should even be allowed switch and aid the bandits in the robbery, triggering a favorable (or backstabbing) response, with many interesting adjustments to your reputation. To provide reward/encouragement, I've been thinking about tying up bounties with skill/character advancement, instead of a traditional system with experience points. Different types of quests and quest givers yield different rewards (more "moving part" that can be randomized on each playthrough). A hermit might tell you about herbs, or a banker gift you with a very fine pistol, or a master duelist teach you the art if you just prove your worth first. I have been thinking about modeling this around a time system that I believe to be pretty unusual.

* Time: An important feature in LoSt is that wounds tend to be very deadly, and with no available source of healing. I want to add a system for resting, for which the basic template will be "staying in a saloon". In a way, resting is my idea of something instead of a food clock. To rest, you have to pay a certain amount of cash (or fulfill some other criteria, depending on where you're trying to lodge), and the game world fast forwards several days, at the end of which you start out with all wounds healed. Depending on how grievous your wounds are, and the status of all pending bounties, the game might calculate an effect/event that occurs during the period you spend resting. The event could be just a simple string, and could often just gloss over a period of quiet, or provide the player with options to advance the plot or character. If you come back triumphant with barely a scratch, you might be rewarded with a skill advancement of your choice. But if you come back with 0Pb and a gun wound, you might develop a bad reputation or foible. What's worse, the guy you set out to kill in act I might come back in act II, with a plan for vengeance. Since the player must rest to heal, they'll want to make each rest count. The yardstick pace for a starting character should be to win one bounty, then rest, and then head out for a new adventure. Longer streches of time could also be passed doing seasonal work, training with a master or living in the underground city of fools.

If you think this sounds convoluted, you haven't heard the half of it. The art will be to keep the story suggestive and the system open ended, connected with factions and all the other "moving parts", to achieve a semblance of direction action/plot.

As always,
Minotauros
Posted by Aging Minotaur at 02:12 No comments: