I think making a Roguelike is one of the best forms of procrastination imaginable. For one thing, it feels a hell of a lot more productive than playing RLs.

Meanwhile, I haven't been coding a lot on LoSt the last couple of weeks. Too busy with work and real life, which ironically turn into forms of procrastination in themselves, seen from the perspective of developing a RL game!

It's all part of the Slow Application Development methodology. Which is to say LoSt is continuing its slow death march towards abandonment. Random animal generation is soon done, after which I might turn to random plant species, or some other part of world generation. The next release is planned as a (bare-bones) presentation of the overworld, and might theoretically come in a few weeks or months. 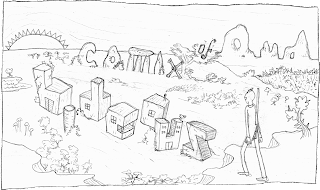 Anyway, I just wanted to divert your attention to my latest, awesome RL-themed procrastination project, namely a fanfic comic about Caves of Qud. Each page represents about an hour of complete idleness, so it's not as bad as it may seem :P

(Edit: Hideous Comics of Qud was originally posted to a comment thread on Freedhold's forums, before the forum was closed. The comic isn't complete (yet?), but I might find another place to host it. In the meantime, you can download it here.)


As always,
Minotauros
Posted by Aging Minotaur at 23:44 No comments: