Just say No
to family values,
and don't quit
your day job.

Drugs
are sacred
substances,
and some drugs
are very sacred substances

In development, certain features give instant gratification to implement. From getting "a @ walking on a map" and onward, it's thrilling to see your game take form. Other features require more extensive work before they start to become noticeable in the game. Seeing these grander plans gradually unfold carries a joy of its own, but for motivation's sake, it's good to sprinkle some short term design goals into the mix here and there.

After I announced the feature poll a few weeks ago, some votes have started to come in, and the option that currently seems to be getting ahead, is to add drinking and drugs to the game. Cheers. So, on the side of working on random sites and factions (which I'm starting to realize will be quite a big undertaking), I started to make sketches for intoxicants for Land of Strangers. It's something I can probably add without too much hassle, but with a lot of potential depth.

So, how to implement drugs in a Roguelike? I think it's a point to keep the presentation tight, as fluff-free as possible. Since this is a one player game, it was clear to me from the onset that the character needs a  mechanical incentive to ingest drugs. Another point that felt natural in LoSt, was to opt for random drugs.

Thinking about taxonomies and making plans for drug effects, it struck me that some of the substances that cropped up, would be "drugs" in the wider sense of actual medicines, but with possible side effects. It will be appropriate to add "druggist" saleskids who peddle anything from psycho serum injections and hallucinogenic meat, to painkillers and natural medicine. Additionally, substances that come from plants and animals can be linked to species in the random biomes.

When it comes to random content in LoSt, I sometimes imagine the templates as something akin to tarot readings or solitaires, with "cards" (kit plugins) laid out in patterns. If the reading is for a person, each node or card represents a strength, weakness, or other detail. If the reading is for an objective, the nodes represent obstacles, helpers, ulterior motives, etc. These nodes branch out and connect, and may spawn nodes of their own (as the random artifact gets an effect, the effect gets a random duration). A prop template for a random drug can probably be structured with nodes in about six different categories:

Form/source, method, dosage: Is it a powder, beverage, flower, etc? Some forms are available in nature (raw or prepared biotic/mineral parts), others are synthesized in a lab. Method and dosage indicate how to administer the drug. This data is at least used to generate the drug as an actual prop in the game world, and provide a skeletal "consume" event with pending effects.

Effect: Most drugs should have a (potentially) beneficial "main" effect. There is a subset of pure combat drugs, but also some effects for other stimulants, depressants, hallucinogenics and miscellaneous. Effects of drugs are typically not instant, but have an onset duration/curve, which can itself be randomized.

Side effect: Potential or guaranteed side effect, typically a penalty, like a hangover.

Overdose, extradose: In excessive doses, the substance can have extra potent (side) effects, including death. Overdose effects will need a probability of incurring depending on dosage and other factors. There can also be a possibility of other "extradoses" that could be outright positive, expanding on the normal effect.

Long term effects: Side effects which can be temporary (chronic as long as you keep using) or permanent (even after you quit). Again, I probably need to randomly set thresholds, timers, etc. for each separate effect. Addiction could be classed as a form of this, but may also merit its own category. 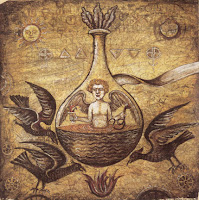 There may be other systems I'm overlooking that should be proper to the drugs as actual props and related events in the game world. But I think that covers the basics. Other questions come on top of the actual prop design, however, including how to put drugs in the game world, and how to present them in the interface.

For intoxication itself, a simple interface may work well. Being influenced could tap one ♥ with a flag describing your feeling. The effects themselves need to be implemented, but a lot can be done with simple status flags. Finer points, like long term effects and poly drug use, will have to be ironed out along the way.

Setting the dials to max random in a prototype generator yields some pretty varied results, like "Murphy (PBUH)", a plant juice to be ingested in the rectum, causing hallucinations, but with the possible side effect of strong and fast on-coming diarrhea. Frankly, that's one of the less weird ones. Transitioning from the prototype generator to data modules will definitely incur some fine-tuning, although hopefully with room for the occasionally utterly absurd.

One thing to make sure of, is that some sane default templates are more or less guaranteed to be generated. For balance' sake, there should probably be at least a few stimulants that increase healing or combat capabilities. We also can't have us a Western without booze, although the drink of choice across the Land may vary from banana wine to corn spirits. Some of the weirder drugs may come with factions and sites of their own, from Delphic cults who gather at natural gas sources to inhale the intoxicating fumes, to outcast colonies that willingly inflict themselves with a euphoria-inducing virus. Other encounters may include junkies/pharmacists paying for rare substances, ranches/pens with psychoactive herds, and other silliness. Sinister drug dealers may be a thing, but there will probably not be any legal sanctions against drugs as such, seeing as how the game plays in a land that hardly has had the time to get any laws at all. There may be abolitionists or a Temperance League, of course, possibly even zealots that sort rather in the general category of "homicidal maniac".

One funny thing that struck me in all of this, was that the question inevitably cropped up whether it could be alienating or inappropriate towards some audiences to add drugs in the game. I had the same thought about swearing at one point. And had to laugh at myself for questioning this in a game that's basically about killing vaguely defined "enemies". If anything, it shows I'm a product of cultural cliches.

On the other hand, I think the random generator will be spitting out some quite dangerous drugs, so I probably can't be accused of glorifying drug abuse. Regarding ethics as such, LoSt was never ever intended to be a showcase of goodness, and it's rather been a stated design goal to grey out "the alignment scale", aiming instead to focus on factors like reputation and social standing. If the game has an age rating, it's some Parental Guidance shit at least, although I can't imagine most kids would take any damage from messing around with my little game. I think the best I could hope for, would at least be to teach them some naughty words.

As always,
Minotauros
Posted by Aging Minotaur at 03:48