The results are in, as LoSt's UI poll closes at the respectable number of 42 voters (I can think of no number more respectable than 42). A heart-felt thanks goes out to all who participated. 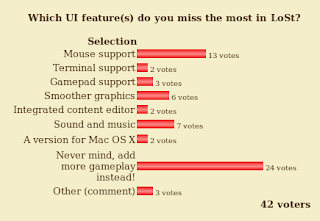 Participants were allowed to pick multiple options, which is why there are slightly more ballots cast than people who cast them.

To test everything, I did leave a vote myself, ticking "Other". It bears noting, perhaps, that I put up the poll in part to gauge interest in the project, and I feel like I'm coming out on the other side with increased motivation, as this shows that LoSt does indeed have a little base of interested players.

Now, to get to the meat of the matter – the results, in order of popularity:

More gameplay (24 votes): Not surprisingly, this option got the most votes. The current interface is certainly acceptable, but the game absolutely lacks content. In the time ahead, I'll try to concentrate on this, adding more encounters, bounties, critters and props, and things to do in general.

Mouse support (13 votes): I'm partial to the keyboard, myself, which is probably why the mouse has gotten so little love up until now – but I am also aware of the fact that a pretty big chunk of computer gamers prefer a workable mouse interface, so had anticipated this option to get a fair amount of votes. The good news is that I've started, and the current testing version on my own laptop is already 100% playable with the mouse. I just need to polish off some rough edges before I can call it officially done, which shouldn't take more than a coding session or two. Expect to read more about the details in the monthly update for December.

Sound and music (7 votes): Moving on, we get to the less obvious options, perhaps. Among these features, audio came out on top. I tend to mute Roguelike games, myself, playing either in silence or with my own preferred soundtrack (The Residents' Mole Trilogy is a personal fave in that department, for that good ol'e chthonian feeling). Also, while I do possess a modicum of musical ability, I really don't have the know-how, or the equipment, to make decent recordings. But I aim to please, and have taken note that music and sound would be a welcome addition to the game, although it may still have to wait for a while. Sound effects I can probably rip from various free sources. Regarding music, I could try to solicit outside help – although being a one-person shit storm does have its benefits. Conversely, I may find the time and motivation to learn some music making on the computer, or make recordings using the equipment I have available (a crappy microphone, some string instruments, plus my kids' electric pianos and various bits of percussion). Surely, I'd have a lot of fun hacking together a grainy sounding, psychedelic honky tonk soundtrack befitting my overall vision of The Land.

Smoother graphics (6 votes): This one would entail an improved gaming experience without demanding too much work, and is something I do hope to sink my teeth into in the not too distant future. First of all, a lot of the choppy graphics in the current release will be fixed by defining dedicated layers for drawing backdrops, sprites, speech bubbles, menu popups, etc. Currently, everything is painted to a single pygame surface – a horrible design decision dating back to earlier releases, when there was much less happening on the screen. At some point, I'll have to retrace my steps and implement a more robust engine. Fixing it shouldn't prove too challenging, but will take some manual work, so it may or may not be something I get around to before the next release. Secondly, some graphical problems (like unevenly tessellating wall tiles) stem from the fact that LoSt uses dynamic scaling. While it's cool that the player can set the tile size to any value their heart desires, the result will look better if I set some predefined sizes, and then go over the sprite sheets by hand. But this may still be a while – it's going to entail a pretty big overhaul, as I'd probably take the opportunity to repaint some sprites I'm not quite satisfied with, fine-tune the walking animations for each critter type, etc.

Gamepad support (3 votes): I don't own a gamepad myself, but I've had this option in the back of my mind since quite early in development. Getting it in the game should probably not be too hard. The Pygame framework, which LoSt is built with, includes support for various joystick peripherals, so it's probably just a question of adding some lines to the code here and there to let the game register gamepad input in the same way as it does keyboard events and the like.

Other (3 votes): As noted, one of these votes was my own, to test that the poll was working. The second vote was cast without any comment, so what that player had in mind remains an open question. The third vote for "Other" came with a comment, namely to add an Android version of LoSt… I have to say, it's a pretty compelling thought, and I do believe the interface itself could bear being ported to a smaller touchscreen. The biggest hurdle, however, would be that LoSt is written in Python, and to my knowledge, there isn't any easy way to get Python applications working under Android. I'll certainly look into whether or not it's feasible at all. Barring that, I would have to port the game to a language or engine with native Android support, but that's not something I've planned at the moment. If I were to start using Godot, for instance, it would probably either be something like LoSt 2, or more likely a different game altogether (maybe a Roguelike with superheroes, or a more puzzle/story heavy game in a world inspired by Carl Barks and Tove Jansson). So while I'm sympathetic to the idea of LoSt running on mobile devices, I wouldn't hold my breath to see it happen.

OS X version (2 votes): Most likely, LoSt is coming soon to a Mac near you. It's not a big deal to "compile" Python applications for personal computers (I'm using pyinstaller, myself) – if you have access to the appropriate hardware. Since my partner just got a new computer, and it's a Mac, I'll try to put my filthy hands on that, and start shipping native binaries for OS X in the near future.

Terminal support (2 votes): I was rooting a bit for this option myself, but the community didn't give it a lot of loving. It means I'll be postponing a terminal version for now, since it'll definitely entail quite a lot of work, and not just of the brainless sort, either. But further down the road, I do hope to get a proper terminal version. It would bring some sweet bonuses, like being able to play LoSt over a ssh/telnet connection, and adding features to support playing with a screen reader.

Integrated content editor (2 votes): This is also an idea I've been kicking around for a while, including a dynamic editor for game data, and the option to enable various mods. Even if it didn't garner many votes, it's still something that might make it into the engine soon. The game's content is kept in human readable text files, which I'm writing by hand. However, I have done some experiments with an automated editor, and found that the process of adding game data became easier and less bug-prone. So while I'll still be relying on my trusty text editor to meet the demand for more content, I would probably be able to chug out more stuff if I put a bit of work into making the editor more streamlined. If and when the editor reaches a certain point of polish, it might as well be included with the public release. I don't see a huge modding community for LoSt emerging, but it certainly won't be a problem if the game at some point supports custom extensions.

That's all, folks. I hope to be able to shoulder the immense responsibility given to me by the poll results ;) Also, since I felt like the poll was a success experiment in and of itself, I'll be broiling my head to come up with another one soon. In the meantime, feel free to drop me a line with comments of any kind, regardless. I'm all ears.